WEAR ABC 3 :: Angels in Our Midst - Angels in our Midst (Taking a Stand Against Bullying)
0 comments
Email ThisBlogThis!Share to TwitterShare to FacebookShare to Pinterest

Jaylan has received ISS (In School Suspension) for hitting another student. Turns out that Jaylan was hit in the face with a glue bottle by this student and Jaylan lost control. Jaylan's ISS is because of  abusive behavior.
I just got the message from the school and I had to call my father to calm me down.

The school said this was 'out of character' for Jaylan and how surprised they were to see Jaylan in the office. Thank God.....your character speaks for itself, yet EVERYBODY has a limit - EVERYBODY. I can only imagine the environment in the class because they had a substitute. Hmmm...

I don't know the details, but I can't wait to see Jaylan after school to find out. Sigh...we thought we were finished since Bully X calmed down, and now this.

By the way, Bully X never received any cookies.
2 comments
Email ThisBlogThis!Share to TwitterShare to FacebookShare to Pinterest

Jaylan has a cookie business and has decided to use his cookies to help spread the importance of character throughout his school. His cookies will also be used to reach those who bully. Everybody needs love and if these children know someone cares, you never know what might happen.

The cookies will come with a small message sharing a particular character trait such as self control, endurance, kindness, initiative, etc...


Today, he has decided to share cookies with the young girl who bullied him. I can't wait to hear what happens or even if he actually does this.

Sex Talk on the School Bus

If I had known Jaylan would be taught sex on the school bus, my husband and I would have saved our many talks on sex. Of course I'm being extremely sarcastic.

Jaylan came home one day saying a few boys were laughing at him because he didn't know certain sexual terms such as pulling, finger f$#%& girls, and a few others I refuse to mention. I explained to him that he has been taught correct sexual terms and the street terms were inappropriate. I didn't know some of the sex language myself, so how in the world was I going to teach it? It is so sad that eleven and twelve year olds are exposed to such language. Where does this come from? Home? If you say it comes from other children, they have to learn it from somewhere. It just doesn't fall from the sky.

Anyway, Jaylan was instructed to sit towards the front of the bus instead of the back of the bus, which is where trouble likes to start anyway. One of the boys laughing at him has been his friend for years and even told everyone on the bus that Jaylan liked boys instead of girls. You know what, I was happy this happened because it was an opportunity for Jaylan to realize everyone is not his friend.
He thinks because he is so friendly and caring, everyone else is. Now here is the kicker...the same little boy that told everyone Jaylan likes boys asked to spend the night at our house. Hmmm...another child obviously calling out for help. I go back to my question from a previous post...who really needs the help here?
1 comments
Email ThisBlogThis!Share to TwitterShare to FacebookShare to Pinterest

After six years of homeschool education, I was led to send Secondborn to school. He was more than excited and set high goals for his grades and conduct. His only concern was being bullied. I don't know if it was a book he read, television, or his friends that put this in his head, but being bullied was his only fear.

Son:  "I wish there was a school where nobody bothered anybody."

Mother: "I don't think that school will ever exist. Is someone bothering you?"

Son: eyes full of water  "They talk about my ears, my teeth, and my big head."

This was the beginning of finding out my dear son was getting bullied. Our conversation took place in the kitchen right before leaving to catch the bus - on the second day of school. I hated to send him out the door feeling the way he was, but I did. What I thought was simple, child-like behavior was not. What I thought would cease, continued. 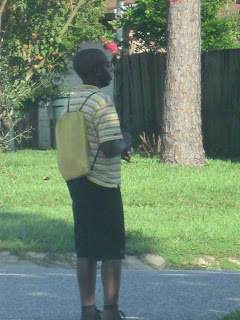 This blog is not an attack on any school or individual, but an avenue to share awareness with parents and children. Our present situation and future solutions to help children across the nation will be shared.